The term carat originates from the word carob. Carob seeds are surprisingly similar in weight to each other. In ancient civilizations, they were used as a reference tool to measure a diamond´s weight. One carob seed was equal to 1–carat.

The current definition is sometimes known as the metric carat, which was adopted in 1907 at the Fourth General Conference on Weights and Measures. It was then followed by many countries around the world. The carat can be divided by one hundred points of two milligrams each. Other subdivisions, mass values that are slightly different, have been used in different locations.

Carat refers to the weight, or size, of the diamond. One carat is divided into 100 points, so weight is mentioned to two decimals.

When determining the value of a diamond, size is the most obvious factor. Diamond price increases as carat weight increases, as larger diamonds are rare and more desirable. However, two diamonds with the same carat weight could differ significantly in value depending on clarity, colour and cut.

Carat weight affects the price of the diamonds more than any other determinant. A diamond that is double the size of any other, could be up to four times the price. This significant difference in price is due to the rarity of larger diamonds. The combination of large size (from 1 carat), with the best colour, clarity and cut, is so rare that the price can be multiplied several times when comparing similar size with poorer features. 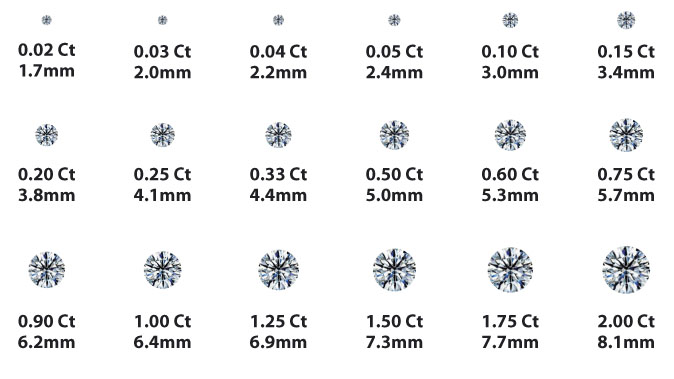 Clarity is determined by the extent to which a diamond is free from inclusions, often called ‘nature´s fingerprints’. The number, type, colour, size, brightness and position of internal birthmarks can affect the diamond´s value. Many, however, can only be seen with magnification under a standard loupe. The fewer inclusions, the rarer the stone.

Inclusions could be crystals of foreign material or another diamond crystal, or they could be structural imperfections such as tiny cracks that may appear cloudy or whitish.

There are different types of inclusions and blemishes that affect a diamond’s clarity to varying degrees. It should be noted that features resulting from diamond enhancements, such as laser lines, are also considered inclusions or blemishes.

Generally, impurities inside the stone have more influence than external characteristics when determining the clarity. The best clarity grade is called “Loupe Clean”, which literally means “clean when viewed through a loupe”. According to the IDC Rules, a diamond is loupe clean if, after examination by an experienced grader with a loupe 10x (corrected for spherical and chromatic aberration), under standardized light conditions, it has been found free from internal characteristics.

Loupe Clean is followed by VVS1 and VVS2, which stand for extremely small characteristics, very hard to find with the loupe.

The next grades, in descending order, are VS1 AND VS2 (very small inclusions) and SI1, SI2 and SI3 (small inclusions). Each clarity grade is further subdivided into 1 and 2 depending on number, size, brightness and location of the characteristics. The lowest clarity grades on the scale refer to inclusions that can be seen by an experienced grader with the naked eye. Depending on the importance of the characteristics I1, I2 and I3 are distinguished.

A clarity grade is determined based on the stone´s overall appearance under ten times magnification.

Most inclusions that are present in gem-quality diamonds do not affect its structural integrity, and are no visible to the naked eye. However, large clouds can affect the diamond’s ability to scatter and transmit light. Large cracks that are close to or breaking the surface could reduce the stone´s resistance to fracture.

Diamonds of higher clarity grades are valued higher, with the exceedingly rare Flawless grade fetching the highest price. Minor inclusions or blemishes can be useful, as these can be used as unique identifying marks for the stone.

As synthetic diamond technology improves and distinguishing between synthetic and natural becomes more challenging, inclusions or blemishes can be used as proof of the natural origin.

Fluorescence refers to the effect of invisible ultraviolet light transforming into visible light. Some stones light up spectacularly in the dark when irradiated by long–wave ultraviolet light. The colour of fluorescence is normally blue, but other colours are also possible.

Normal daylight contains a certain amount of UV–light, and so the fluorescence can influence the colour of the stone. The degree of fluorescence is determined by comparing the diamond to a series of master stones, special test stones, which indicate the limits between the different grades under long-wave UV–light.

About a third of all diamonds fluoresce, and of these, the most common colour is blue, then yellow. However, they can fluoresce other colours too, but these would be rare.

Strength is the second factor to consider. The fluorescence grades range from: nil, slight, medium and strong. A diamond can sometimes have very strong fluorescence, but the diamond may have an ‘oily’ look to it, even under normal lighting conditions. In this case, a negative value would be expected.

A diamond that is structurally perfect and chemically pure, is perfectly transparent with no hue. However, in reality there are almost no gem–sized diamonds that are absolutely perfect. A diamond can be affected by both chemical impurities or structural defects in its crystal lattice.

A diamond´s colour can both detract or enhance from its value, depending on the hue and intensity of the colour. For example, most white diamonds decrease in value when a yellow hue can be seen. However, intense blue or pink diamonds, like the Hope Diamond, can be extremely valuable. Out of all colours, red diamonds are the most rare.

Colour is determined by comparing it to an internationally approved series of master stones.

Diamonds range in colour from icy winter whites to warm summer whites. Warmer coloured diamonds are particularly desirable when set in yellow gold. Icy winter whites look stunning set in white gold or platinum. Colour differences are very subtle, and it can be very difficult to see the difference. Therefore, colours are graded under controlled lighting conditions and are compared to a master set for accuracy.

Over 90% of gem diamonds have a yellowish colour. Intensities can vary from nearly colourless to decidedly yellow. Colour grades are named according to the International Colour Grading Scale.

The best colour is called “D”, and lowest on the scale is a “Z”. The nuances between two contiguous colour grades are very difficult to distinguish; to determine the difference, the stone is placed between master–stones on a white background. The subtle differences can only be judged when stones are examined through the pavilion side.

A very important aspect of colour grading is the illumination used. We use D65–lamps, which have a colour temperature of 6.500 Kelvin and meet the CIE standard (International Commission on Illumination).

Besides slightly yellowish, diamonds can have different colours like orange, brown, pink, green and blue. Diamonds with a beautiful and rare colour are extremely valuable.

Cut is the last of the 4 C´s, and can be judged separately; the finish grade and proportions. When examining the finish grade, attention is mainly paid to possible symmetry–deviations and facets. A good finish grade testifies of the workmanship of the diamond polisher.

The proportions, the relationship between various parts of the stone, determine the fire and brilliancy of the diamond. If proportions are not optimal, the visual effects may be undesirable.

Main symmetry–deviations and proportions are first judged on the basis of objective, measured data. For this purpose, a Dia–Mension system is used: with the aid of a camera, a large number of measurements are taken. After, these are interpreted by a computer. The results are then checked by comparisons to grades given on basis of visual examination with a loupe.

Practical history of diamond cuts can be traced back in time to the Middle Ages. The theoretical basis, however, was not developed until the 20th century. Design innovation and creation are still being developed today. New technology, especially laser cutting and CAD, have enabled development of cuts whose complexity, optical performance and waste reduction would have been unthinkable in the past.

The most popular of the different diamond cuts is the modern round brilliant. The facet arrangement and proportions have been perfected both by empirical and mathematical analysis. Fancy cuts are also very popular. They come in a variety of shapes, many of which derived from the round brilliant.

The cut of a diamond is evaluated by trained graders. Higher grades are given to stones where the symmetry and proportions most closely match its particular “ideal”. The round brilliant has the strictest standards, because although the facet count may be invariable, the proportions are not.